Arsenal is a club facing change and while that evolution has already begun, there is still a long way to go. The team must settle and grow before we can expect too much from them.

It’s astounding that some fans have, for some reason, come to expect a title-challenging squad within a few months of finishing 6th place in the Premier League. After a summer that has seen a change of manager, a significant change in playing personnel, and a restructuring of the board. You are the victims of your own stupidity. Other than the odd anomaly (Leicester), no team has ever had that kind of switch in performance and results and so setting those standards for your club is bordering on madness. Why torture yourself?

Ok, I can understand that realism doesn’t rear its head in football fandom all that much, and I myself get caught up every now and again, but there is a big difference between being hopeful and being hopelessly unrealistic. Coming across such scathing reviews of our team’s performance against Man City, the champions, a generational team, with a generational star of a manager, was really quite grating, and listening to some of the fan comments while watching at the Emirates was even worse.

I was disappointed not to get a result from the game, like any fan would be, but the slandering of players and management that was seen/heard as soon as we kicked off was quite frankly ridiculous. One of the comments heard from a couple of rows behind, had particularly gotten under my skin, ‘See nothing’s changed. Wenger has truly run this club into the ground’. First of all, why are you still talking about how Arsène Wenger has ‘ruined your club’, you got what you wanted, and he is gone, stop grabbing hold of his coat tails with your miserable paws. Secondly, I don’t know what you were watching but it can’t have been the same game I saw. The number of positives I drew from that game was incredible, and I was not expecting to see such a change so immediately. Our defence looked significantly more stable and organised, the way we pressed was refreshing to see after years of being passive out of possession, we adapted to the game with positioning and formation, Guendouzi’s positive performance, Lacazette’s introduction, Sokratis’s at the back, I could go on and on and on. What were you expecting? A complete turnaround and to thump Man City 5-0, with an Aubameyang hattrick and Grant Xhaka scoring a scorpion kick from the halfway line? Bonkers.

Here are some realistic expectations for the 18/19 season. To challenge for fourth place, to reach the latter stages of the Europa League, to see a gradual adoption of Emery’s style and football philosophy (already evident), to beat Spurs and call them s*** (will be calling them s*** regardless), an improving defence (already evident), to challenge in one of the domestic cups, and finally, to see a small and steady improvement from the team. 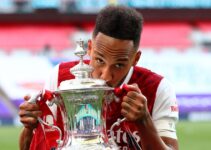